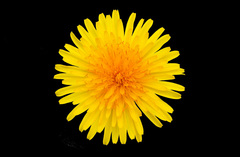 ​​Dandelion Stories
By
​Terry Northcutt
Early spring. Days and days of gray clouds threatening snow blended into days and days of gray clouds threatening rain. When a few shafts of sun finally filtered through the clouds, I stirred myself from a gray lethargy to walk my dog. I was rewarded for my effort. Dandelions, or to my eyes that day, a profusion of small radiant suns, had alighted on the low hill of my neighbor’s lawn. They welcomed me; they warmed me; they promised blue skies, a rainbow palette of flowers, white puffy clouds, and a huge bright beach ball of a sun in the near future. I wanted to bask in this landscape, but my dog tugged on the leash and another spring, another hill, and another abundant crop of dandelions tugged at my thoughts. This was the spring my family received anonymous letters from a neighbor. As I walked along I remembered how angry those letters were. They told the story of an epidemic of dandelions in our neighborhood, dandelions which to my neighbor were an eyesore. According to my neighbor, my family was responsible for the epidemic of these invasive weeds.

It was true that our yard was spotted and dotted and speckled with dandelions. But our yard was also routinely mowed and our bushes trimmed. There were no rusting cars and appliances in the yard and there was no garbage strewn across it. I was a teenager at the time and I was bewildered by my neighbor’s reaction to our dandelions. I was absolutely certain that my neighbor was wrong—wrong about dandelions, wrong about my family, and probably wrong about anything else that did not conform to my own beliefs, opinions, and views of the world.

I am older now. I do not know when or why or how, but somewhere through the journey of years, I lost that youthful certainty. Additionally as I have gotten older my mind often seems compelled to mull first one side of an issue and then the other and then a third and sometimes a fourth and a fifth. It is very tiring but, alas, this compulsion must be honored or my mind will have no peace. And so I began to wonder about weeds and then I wondered about the difference between a weed and a flower. My American Heritage Dictionary states that a weed is “a plant considered undesirable, unattractive, or troublesome, especially one growing where it is not wanted, as in a garden.” My neighbor definitely considered the dandelion to be unattractive. But I did not. And that was the point.

While I had collected stories about dandelions as pretty wildflowers that heralded spring and proclaimed the beautiful weather to come, my neighbor had collected stories about dandelions as ugly weeds destroying the beauty of lawns and invading spaces where flowers should bloom and blossom. My family’s failure to eliminate them made us the villain in her story.

I wondered if there were other stories about dandelions and stumbled upon a small book by Anita Sanchez entitled The Teeth of the Lion: the Story of the Beloved and Despised Dandelion. It is a wonderful book for someone like myself who is compelled to understand things and to mull. In her book, Sanchez tells the story of the Japanese who found the dandelion so beautiful they created horticultural societies devoted to it. She presents information about county fairs in the early history of our own country in which the beauty of the dandelion merited exhibits and prizes. In fact Sanchez says that “gardeners used to weed out the grass to make room for the dandelions.” She goes on to recount the dandelion’s healing and nutritional properties that compelled early settlers to transport it across an ocean and pioneers to transport it across the continent.

Most of Sanchez’s stories testify to the dandelion’s worth. So what stories compelled my neighbor to label the dandelion as an unattractive, undesirable, troublesome weed? Sanchez briefly addresses this question. She details the dandelion’s complex structure that  enables it to thrive in soils and conditions where other plants cannot grow and then to thrive by dispersing as many as two hundred seeds per flower head—a germination rate of ninety percent not being unusual. My neighbor would have been appalled to know these numbers.  My teen self would have loved to have quoted them to her just to watch her reaction as she swiftly computed the thousands of seeds our lawn sent her way. My older self concedes that her complaint about the dandelion being troublesome and invasive was quite valid.

Sanchez reveals another factor that explains my neighbor’s complaint. In the early twentieth century, garden clubs and civic organizations began to tell a story about the ideal American landscape. They urged people to beautify their lawns by planting grass rather than vegetables and flowers. This story changed the understanding of what constituted a beautiful lawn. And with this new story the beloved dandelion became a weed, a nuisance, an intrusive invader, something to eliminate. With the exception of Anita Sanchez’s book and picture books for children., this was the major story I encountered about the dandelion—although sometimes it was used in novels as a symbol for strength, perseverance, and persistence.

Mulling over these different stories about the dandelion, I began to think about the power of stories to suggest to various degrees what is good, what is bad, what is right, what is wrong, what is beautiful, what is ugly, what is worthwhile, and what is worthless. The degree to which someone agrees with a given story has the potential to shape what they do, what they do not do, how they relate to others, and whether or not they send a letter to a neighbor to compel them to eliminate dandelions. Unlike my teen self, my older self is not bewildered by my neighbor’s story about dandelions or her actions. I can now understand the many stories she has accumulated that have shaped her responses. I concede that dandelions are so hardy they are invasive and troublesome. However, on the first day of early spring after months of gray, I cannot agree that they are unattractive. I need their warmth, their welcome, and their promise of a bright beach ball of a sun in the near future.
More Essays